Jaisalmer, popularly known as ‘golden city’ lies in the center of the Thar Desert. The Golden city was founded by Maharawal Jaisal Singh (a Bhati Rajput ruler) in 1156 Ad. Due to golden sand of Thar desert and constructed buildings with same colored sandstone, the city is also famous by the name of ‘Golden city’ in Rajasthan. The city is full of regional arts and crafts, and unique magnificent architectures.

Bada Bagh, which means ‘Big Garden’. Bada Bagh is situated on Ramgarh road. It was constructed in the beginning of 16th century by Maharawal Jait Singh and after his death, it was completed by his son Lankaran. Garden served as a memorial monument where the nobles and their families were cremated. The Bada Bagh offers an incredible view. The place is inaccessible. If you visit the place during sunset and sunrise, you make sure of amazing moments, which you cannot avoid clicking photographs.

The Patwon ki Haveli is one of the massive and the important haveli in this city, and the Haveli is built in Jaisalmer.That It is not a single haveli but a cluster of five small havelis. The first in the row is also the most popular, and is popularly known as Kothari’s Patwa Haveli. The one of among these was commissioned and constructed in the year 1805 by Guman Chand Patwa, then a rich trader of jewelry and fine brocades, and is the greatest and the most grandiose. 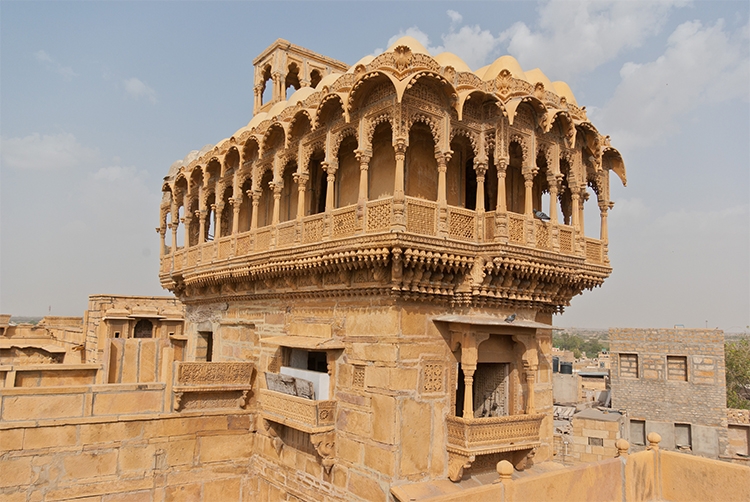 The Maharaja’s Palace is one of the most famous and attractive sites in Jaisalmer.It is a small yet fascinating structure with sufficient to see. Maharaja Palace is located close to the Jaisalmer Fort. The best five-story majesty of the rooftop which offers the fantastic view of the city and desert. You can also see the fabulous marble throne of the Maharaja. Most of the artifacts in Maharaja Palace like the royal bed, local stamps, the silver coronation throne and banknotes, and sculptures.